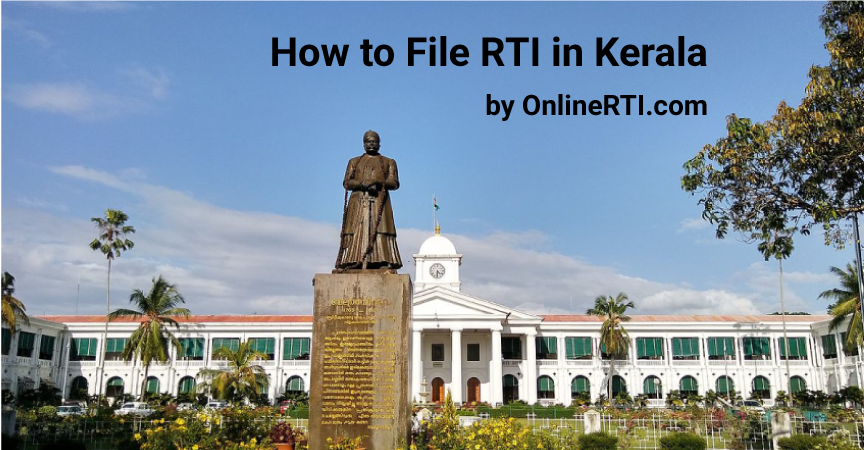 How to file RTI Application for Kerala:

The Right to Information Act, 2005 is applicable to all States of India except the State of Jammu and Kashmir. However, each State differs in terms of implementation of the Act and each state has different guidelines when it comes to filing RTI application. Kerala RTI Rules have been made by the Governor in accordance to the provisions of sub section(1) read with sub- section (2) of Section 27 of the Right to Information Act, 2005. It comes into effect from the 10th of March,2006. To enlighten yourself with the rules implemented byKerala, you can read

If you wish to exercise your Right to Information, follow the steps mentioned below in order to successfully file a RTI Application in Kerala.

The first step to file an RTI Application is to identify the Department / Public Authority. Section 2 (h) of the RTI Act lays down the definition of Public Authorities that come under the ambit of the Act. For eg, all civic issues like water problem, garbage, street lights, building permission in cities are under respective Corporation. In case the matters pertain to Kochi Municipal Corporation which is a Public Authority, you should address the same to the Corporation. Likewise, if the matter pertains to the Department of General and Higher Education, Kerala, you should address the same to the concerned State Public Information Officer (SPIO)/ Assistant State Public Information Officer (ASPIO) of the Department. Following are the list of Government Departments to which RTI is applicable.

You should address your queries in the Application in simple language, you can write the application in English or Malyalam Language. It is important to note that “Wh” questions are not entertained in RTI. For eg, you wish to know the Status of your Water Connection Application from Kochi Municipal Corporation, you can frame the question as “Please provide information pertaining to the Status of the Water Connection” or “Please provide Reasons as per Record for Delay in issuing the Connection” instead of asking “Why is the Water connection not issued”. Also you cannot ask Situation Based questions / clarifications involving “If” in the application.

As per Rules’2006, Application should be submitted in the following format to seek information under RTI Act’2005:

(Name of the Office and Institution with complete address)

Date Signature of the Applicant

According to the RTI Act, the response to the RTI application in Kerala, or any other state should be provided by the PIO within 30 days from the receipt of the same. This includes applications made online or offline. If the information requested in the RTI relates to another department, then the PIO is mandated to transfer the same within 5 days from the receipt of the RTI to that department who has the information. A First Appeal can be filed to the First Appellate Authority (FAA) if there is no response from the government office after completion of 30 days or if the Applicant is not satisfied with the response of RTI Application.

In case you are not satisfied with the outcome of the First Appeal, or there has been no order passed by FAA, A Second Appeal can be filed to Kerala Information Commission.

Once the application is drafted as per the Steps mentioned above, you should send your application via speed post or registered post to the concerned Department.

To file an RTI Application on OnlineRTI, follow the steps below:

To know more about the procedure to file RTI on OnlineRTI, please visit